skip to main | skip to sidebar

Oops, hey friends. Sorry I dropped off the face of the blogosphere for a while... super quick update: I'm still in Madrid and still LOVING IT!  I just bought tickets to come home on July 15 though -- legit fastest year of my life.

Here's a brief photo-essay update to prove that I've been doing lots of cool, chulo, time-consuming things and cosas, which is why I haven't written in so many moons.

I'll start by going WAY back to my first real trip, during a puente (right, "bridge"... also "long weekend") in October, where 3 other Fulbrighters (it should have been +2 more, but they accidentally booked the wrong travel dates) and I hit up the beach town of Lloret de Mar, on Spain's Costa Brava:

This photo doesn't do justice to the beautiful Mediterranean, or all the topless European tourists.
I also ran into an unprecedented number of Oxy folks in one weekend back in the crazy, how-were-so-many-Fulbrighters-born-in-one-month?! constant party that was October: 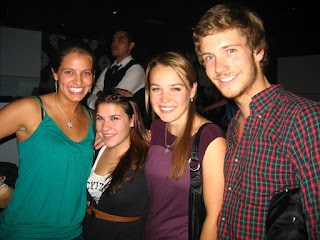 Me, Sonia Lessuck '11, Maddie Knaup '08, and Taylor Griggs '11 at a very strange, pijo (posh) club, Serrano 41.
I celebrated my 23rd birthday with another Minnesota Fulbrighter (there are TONS of us... but this one happens to share my October 28th natal day) in the most culturally sensitive of ways -- throwing a EuroTrash-themed potluck party: 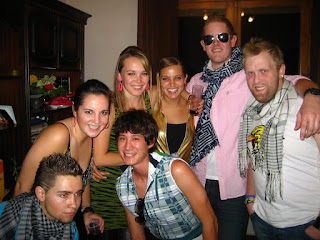 Just a bunch of trendy Spaniards hangin out.
In early November, I caught a 7Euro RyanAir flight to gorgeous, sunny Valencia to hang out with some Fulbright folks teaching in Alicante: 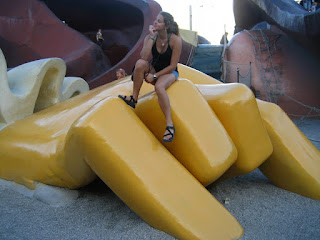 The greatest park ever: a massive, fallen Gulliver to climb all over.
As you know, later that month I met the Prince (because, as Paula said, I deserved it, claro): 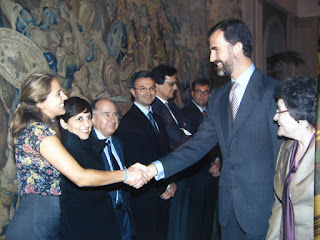 A close-up of our official handshake and me grinning like a crazy person.
After cooking vegetarian stuffing for our back-to-back nights of delicious Thanksgiving celebrations to wrap up November, December was a whirlwind month of lots of friends, lots of rain, lots of traveling, and little school. I spent a puente at the beginning of the month exploring northern Spain's Pais Vasco (Basque Country) in rainy San Sebastian and Bilbao, followed by a brief less-than-24-hours in Cantabria's Santander: 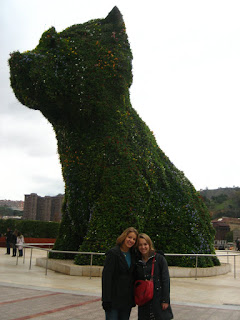 Maddie's and my Christmas card pic in front of the Puppy ("Poopie," as our students pronounce it) at the Guggenheim Museum in Bilbao.
At the end of the month, as our students wrapped up their first term, Cam arrived in Madrid for what turned into a two-week period of the sky unleashing its wrath upon the whole country. His first full day in Spain, we trudged (late) to my school through actual snow (?!?) and presented a PowerPoint about US holiday traditions. 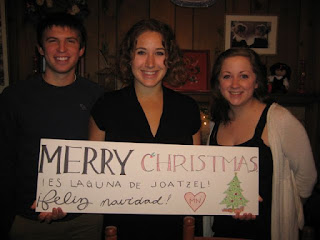 My sister Adrienne, with friends Dylan and Ali, made an awesome sign for us to include in the presentation, but in true Lobl family fashion, it arrived too late for more than one class of students to appreciate.
Cam and I ventured to southern Spain, touring la Alhambra and running into an Oxy friend at a Belen (Bethlehem scene) in Granada, appreciating an afternoon of sun in Malaga, stumbling upon Ian Cameron at another Belen in Sevilla's massive cathedral, and spending a night in a renovated parador (castle). 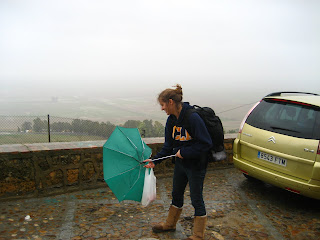 If I checked into a parador looking like this, and you were the receptionist, would you really think it reasonable to ask me, "So is your car parked outside?"
For Three Kings Day, Madrid held an extravagant parade (Cabalgata de Reyes Magos), complete with creepy 6-sided floating heads, giant red giraffes, and a sweaty, black-faced King Baltazar. 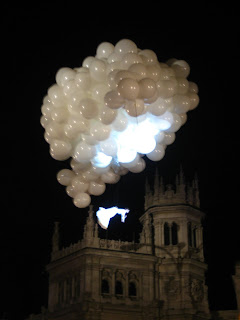 This "Up!"-inspired woman kicked off the Cabalgata by flipping gracefully through the air. I don't think I've ever been so jealous of a parade float.
In early January, I moved apartments to get away from the smoke-filled, generally empty room that was my 30-year-old French male roommate.  I've been MUCH happier living with another Fulbrighter and a sweet Spanish dancer from the Basque country in our spacious piso. 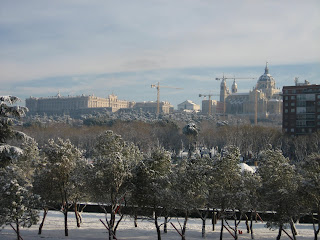 The view from the my building's front door on what should have been our first day back at school after winter break. I'm all for Snow Days, but too bad I had to arrive in Getafe at 8:30am before finding out from my students that school was canceled.
In response to the devastating earthquake in Haiti, I proposed to my students that we organize a school fundraiser. After only a week or so of frantic planning and coordinating and pricing and labeling, the 2nd-ESO students ("segundos," ages 12-14) pulled off an extremely successful yard sale in the front lobby of our school. The donated items up for sale ranged from math flashcards and "Hamlet" (the Spanish translation) to posters of soccer stars and dried-up highlighter markers.  Our "Mercadillo Solidario para Haiti" raised around 630E for Medicos Sin Fronteras (Doctors Without Borders). 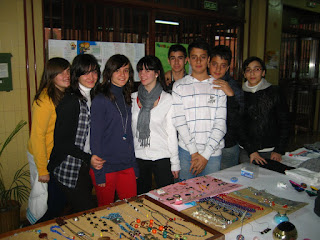 One of the early groups of volunteers -- their smirks don't accurately show the true excitement of missing class to sell broken jewelry and chicken-shaped alarm clocks.
Immediately following the Haiti Mercado, I left for a weekend trip to Budapest with a Fulbright friend, Evan. We thoroughly enjoyed the city (despite the darkness from 4pm on), experiencing a Turkish bath, the Terror Museum, hilarious language misunderstandings ("This shirt say, 'It's a Monday scene.' This one, vegetable statistics."), a hairy-pig-sausage festival, and more. 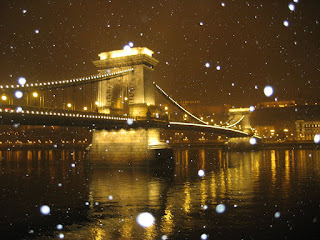 The Chain Bridge, photographed through the falling snow, the way we saw everything in Hungary.
Carnaval was celebrated at my school with an early end to Friday's classes and a party on the outside patio, with competitions for best dance performance and best costume. I was more than a little shocked when a group of 16-year-old girls slithered around on the raised platform, dancing on chairs in booty-shorts and skimpy tank-tops, and not only were not reprimanded or asked to stop, but in fact were awarded second place and presented with flash drives inscribed with the school's name. Ohh, Spain. 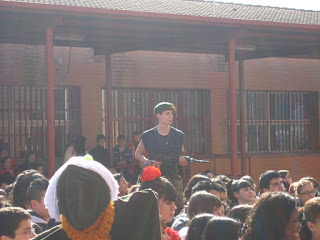 Also surprising were the very real-looking fake guns a number of students brandished as costume props.
A large part of the Fulbright secondary TAs' roles through March was teaching and organizing Global Classrooms, Madrid's Model UN conference for bilingual students.  While the other TAs and I had a lot of work to do (like editing Position Papers, running mock conferences, and understanding the difference between the various points and motions well enough that we could teach our kids), the students worked so much harder, and they did an absolutely amazing job. Not only did they re-write their Position Papers countless times, they also had to learn a ridiculous set of English vocabulary (from "Rapporteur" and "Honorable Chair" to "Point of Personal Privilege" and "I motion to move to a 15-minute moderated caucus with a speaking time of 5 minutes for the purpose of beginning to formulate resolutions"), and (at least in my Asia committee) all the students actually spoke in English throughout the entire conference! 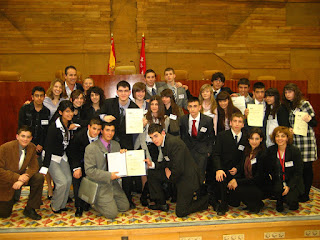 I literally felt like such a proud parent. Look how cute they are!!
In mid-March, the Fulbright Commission sent all grantees in Spain (TAs and researchers alike) to Santander for a mid-year conference. It was fascinating to hear what the researchers had been working on, interesting to meet the older professors studying here, and surprisingly constructive to discuss with our peers about the TA experience. Plus, it didn't hurt that they put us up in a 5-star hotel, where I was hilariously under-dressed for nearly all of the group meals (served by waiters who, with towels over their arms, refilled our glasses after each sip). 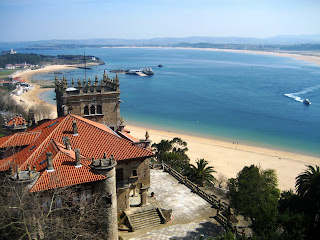 Within ten minutes of checking in and seeing this stunning view from my room, another classy Minnesotan and I sprinted down the plush carpet of the hotel's halls, collecting people to explore the beach with us.
Over Semana Santa a few weeks later, I traveled with three friends to Istanbul, Turkey. We had an amazing time visiting incredibly old mosques and palaces, cruising along the Bosphorus Strait, petting all the street cats, bartering for the best deals in the Spice Market and Grand Bazaar, avoiding the outrageously over-priced tourist-trap restaurants near our hostel, and perfecting the flavor of the ubiquitous "Turkish Tea" (best taken with 2-2.5 sugar cubes stirred in). 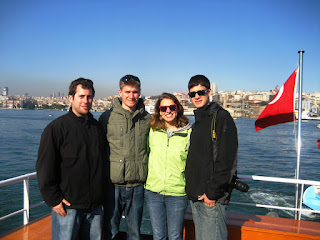 Lookin' fly on the Bosphorus (Tim, Kyle, me, Evan)
Six hours after I returned from Istanbul, Cam flew into Madrid, and we headed back to Barajas Airport the next morning to catch a flight out to Athens. After staying in the capital for two nights and running all over the city to see the incredible ruins, we left the pollution behind (disclaimer: not actually that noticeable; just pointed out incessantly by our favorite tour guide Rick Steves) to spend less than 24 hours in Nafplio, a gorgeous seaport town. The weather on our brief, riot-free jaunt in Greece could not have been more perfect, and even Madrid put on its best sunny show for the rest of Cam's visit, possibly making him forgive at least some of the torrential downpours of his winter break trip. 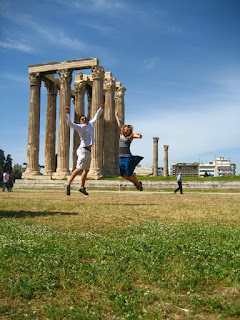 Before being barked at to only take "NORMAL!" photos.
And that catches us up to now! This coming weekend, although it's Adrienne's birthday, Mother's Day, and Madrid's San Isidro celebration, I'll be leaving all things familiar and heading to Tangier, Morocco with four Fulbright friends. Then on Wednesday my parents arrive and immediately embark on a couple of crazy-busy weeks, with plans in place to travel to Barcelona, Granada, Sevilla, Galicia, and obviously hang out with me in the 'drid. Despite all this fun, I'm hoping to find a little time to post quick updates... but we'll see how well that dream goes.

In the meantime, if you know of any awesome jobs in San Francisco for next year, please send them my way!

Jess Lobl
Madrid, Spain
This blog is not an official Fulbright Program site. The views expressed here are entirely those of Jessica Lobl and do not represent the views of the Fulbright Program, the U.S. Department of State or any of its partner organizations.